Today we got hold of the July edition of the Oldtimer-Praxis and immediately became nostalgic at the sight of the front page, because two classics cars of the former Bremen car manufacturer Borgward are pictured there: An Isabella as pick-up and the B 611 tow truck. The Borgward company and its vehicles are closely linked to the history of TANDLER.

Gear cutting technology was the first focus of our company. In the 1950s and 1960s we mainly worked with the Bremen automotive industry. Our commitment was not exactly small: 2 million differential wheels were produced by TANDLER for Lloyd Motorenwerke - for the so-called Leukoplast bomber, for Lloyd Alexander and also for Borgward Arabella and Isabella.

When Borgward went under and our main customer disappeared practically overnight, our company was faced with a very tough test. Our company founder Siegfried F. Tandler had to use all his skills to save the company. With this kind of challenge, it becomes clear what an entrepreneur must be made of. After a few weeks we had a secure footing again:  For TANDLER it was the starting signal away from mass production to individual production and the development of own products.  With the TANDLER spiral bevel gears a new era in the now 71-year-old company history began.

We have found a small reminder of this time in our archive: Gert S. Tandler, our current manager, with his mother Charlotte in 1957 in front of the Borgward Isabella. 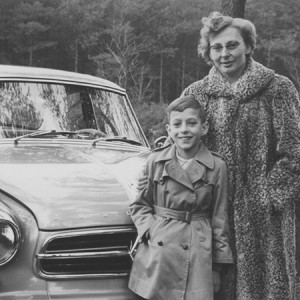 Take a tour through our manufacturing facilities